I’ve been taking a walk exploring the architecture in Singapore and I was really amazed to discover how many types of Architecture can be found here! This is due to our immigrant culture and colonial past, that just spices up the whole melting pot that is Singapore. I totally like. More scenes to capture for your Facebook photo albums!

Designed by Briton Frank Dorrington Ward, a civil servant of the Public Works Department, it was built in the Classical style by United Engineers. It and its neighbor City Hall, will be converted into the National Gallery of Singapore in 2012, a new and exciting Arts Destination! Akan datang! (Malay for coming soon)

The Fullerton Building in Singapore

A tribute to Robert Fullerton, the first governor of the United Settlements who served between 1827 to 1830, this building was originally a post office! By  1998 after a $400m face-lift, it was converted into the majestic Fullerton Hotel.

The Victoria Theatre and Concert Hall

Built in phases between the years of 1855 and 1906 during the Victorian era, this historical building first originated as a Town Hall for Singapore during colonial times. It has indeed stood the test of time, lasting through World War Two when its Memorial Hall served as a hospital for the victims of bombing raids. It is now undergoing the second refurbishment of its lifetime, and will reopen in all its resplendent glory in 2013.

The National Museum of Singapore

Singapore’s oldest museum dating back to 1849, and built in the Neo- Palladian and Renaissance style, and later redeveloped by W Architects, this is a work of art you shouldn’t miss! It also houses many Singapore treasures, and also excellently curated permanent exhibits like the Singapore History Gallery and the Singapore Living Galleries. They are all highly- interactive and are a MUST GO for history buffs like me! There you will be given radio guides that bring you to the world of Singapore as you navigate the exhibitions.

2) We’ve got the traditional Ethnic and Religious Buildings like: 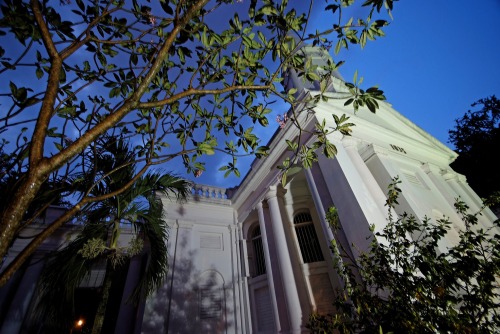 The Armenian Church is the oldest church in Singapore. It was designed by colonial architect George Coleman in the British Neo-Classical style and completed in 1835. That makes it close to two centuries old!

One of the oldest and most important Hokkien Temple in Singapore, it was frequented by Chinese immigrants who paid homage to the Goddess of the Sea (Ma Zu) in thanks for a safe passage. It is built in traditional South Chinese architecture and the most amazing thing about it was… IT WAS ASSEMBLED WITHOUT NAILS! Imagine that! Completed in 1842, it is now at the grand old age of about 170, still standing strong. An architectural spectacle in its on right.

Built by Sultan Hussain next to his palace in Kampong Glam, this is a beautiful place of worship for the Muslims in Singapore.

Built in the Dravidian style typified by the step design with sculptures of many deities on each step, this is the oldest Hindu temple in Singapore. It was built to honor the goddess Mariamman, who is a Hindu goddess worshipped for protection against diseases

To order discounted tickets:
kusu.sg@gmail.com or +65 8282 1312
Free delivery to your hotel/hostel in Singapore.
All Singapore attraction tickets available.
Guaranteed best price in Singapore.